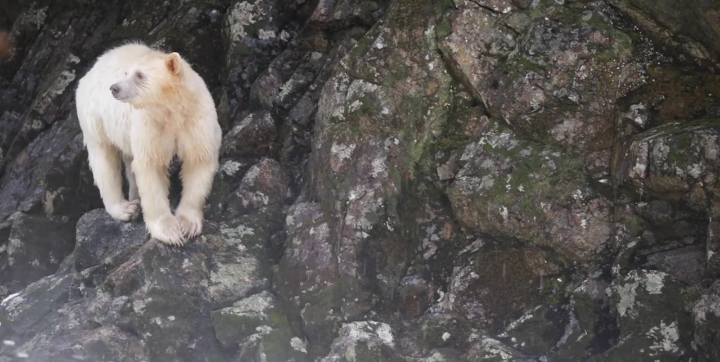 A white-furred Spirit bear in territory of the Kitasoo/Xai’xais First Nation. Video by Philip Charles.

And now that the secret is out, coastal peoples, including the Kitasoo/Xai’xais and Gitga’at Nations, are determined to preserve the bears’ uniqueness. That’s part of what motivated Indigenous-led research, co-authored by Mr. Neasloss, who is now resource stewardship director for his Nation. The study, published Sunday in Ecological Solutions and Evidence, suggests that the gene that turns the coat of these Spirit bears ghostly white is rarer than previously estimated, and that their habitat in the Great Bear Rainforest in Canada is not yet adequately protected.

Though culturally significant to First Nations, scientific understanding of these bears is in its infancy. And ecotourism, including viewing bears, now drives employment and revenue along British Columbia’s Central Coast, where the largest tract of intact temperate rainforest left on the planet was partially protected in a 2016 agreement designating the Great Bear Rainforest. The Kitasoo/Xai’xais and Gitga’at Nations have spearheaded a collaboration with scientists to better understand the prevalence of Spirit bear genes, while also probing how well Spirit bear hot spots are protected. Spirit bears are not albinos, but born with the same genetic quirk that causes red hair in humans.Credit: Cael Cook

Taking the pulse of this rare bear in a remote, mountainous, boggy and largely roadless rainforest archipelago is no easy task. Previous studies had largely confined sampling to areas like river mouths where bears were already known to occur. But Mr. Neasloss and his colleagues, including Christina Service, a bear scientist with the University of Victoria and the Kitasoo/Xai’xais Stewardship Authority, cast the net wider, undertaking noninvasive sampling of DNA from bear hair collected across a vast region.

Bear hair snagging involved a corral of barbed wire erected around a smelly lure: a gray oily sludge made from odor-enhanced fish fertilizer.

Though snagging bear hair on barbed wire might sound painful, it’s not. In the spring, bears are happy to rub against anything that helps them shed some of their thick winter coats, making for a convenient, culturally respectful sampling method that does not require the capture and tranquilizing of bears.

Snagged hair tells many stories. From it, researchers can discern a bear’s species, sex, stress level, food preferences and — central to this study — whether it’s a carrier of the coat-lightening Spirit bear gene.

Spirit bears, though whitish, are not albinos.

“Albinism affects all the pigment cells in the whole body,” while Spirit bears typically have black feet and slightly orange fur, said Kermit Ritland, a geneticist at the University of British Columbia. In 2001, he and collaborators identified the gene responsible for the Spirit bear’s white coat. It’s the same genetic quirk that causes red hair in humans, and auburn fur in dogs and mice. Spirit bears can be born to parents that may or may not have white fur themselves. For example, a mama and papa black bear each carrying one copy of the recessive gene can produce a white-furred baby. The frequency of the gene variant that causes the snowy coats was half as common as previous studies estimated.Credit: Doug Neasloss

The researchers mapped the bear genetics using hair from 385 bears snagged at over a hundred evenly spaced high- and low-elevation sites on First Nations territories, during May and June from 2012 to 2017. They found that in some places previously known to be hot spots for Spirit bears, the frequency of the gene variant that causes the snowy coats was half as common as previous studies estimated.

They could not say whether the finding reflects changes over time, versus different sampling designs. But it is clear from the new data that the Spirit bear gene variant, while rare, is more widely distributed across the landscape than previously documented. And, by overlaying the geography of the gene’s occurrence with protected areas, the researchers found that many Spirit bear hot spots are not yet adequately protected from habitat loss from logging. Current protected areas have “missed the mark,” Mr. Neasloss said.

Dr. Ritland welcomed the new estimates of Spirit bear gene frequencies, which provide a useful view of their prevalence over a wider range. He questioned the new study’s suggestions about the evolutionary forces that maintain Spirit bear genes, which run counter to his own conclusions, but he commended the wide-ranging sampling and the lead role taken by First Nations researchers.

In Kitasoo/Xai’xais culture, bears are considered closely related to humans. Bear and human diets of berries, plants and fish are very similar. In his culture’s stories, Mr. Neasloss said, the bears “taught us how to survive off the land.”