“It’s all of us together, or it’s all of us, together” I often say with a chuckle. Aren’t we all archetypally guided by the same dream of paradise, our soul’s native home? Despite our thinking we are separate from each other, aren’t we unitary in our origin and purpose, born not for ourselves alone but for the world? The Order of the Sacred Earth celebrates these truths and its formation is literally the fulfillment of an experience I had in 1984. I share in profound gratitude for this opportunity, a true story.

In 1957, as a three-year-old toddler, I committed my first of numerous acts of rebellion. I waded with forethought into the deeper waters of our family pool beyond the kiddie step while my parents and other adults were up the hill out of sight. “Come to the light,” said the voice I heard, which seemed to mean the shining sunlight on the waters above my head. But I could not right my body from its somersaulting underwater. Realizing I had made a fatal error, in thinking I would be able to swim like the older kids around me, I was drowning. Suddenly though, I found myself above the pool in the arms of a beautiful woman as large as the oak trees, as enormous as the clouds, a woman cloaked in a cerulean blue robe and white trim, golden hair and the pure emanation of love. She cradled me in her arms until I hit the ground on the side of the pool from the force of my mother’s saving motions. “Oh, she’ll be alright” I heard her say, reassuring everyone now gathered around me. Rebellion has a price and its rewards.

Seven years later, during my Jewish Sunday school’s field trip to a local church to visit children our age, a boy and girl there asked me tauntingly, “Can you show us your horns?” As horrific as that experience was, my focus shifted to a beautiful statue I saw on a pedestal inside the church. This was the lady who had saved me from drowning. Discovering this was a revelation and in that moment I became a heretic, a Jewish girl who secretly loved the Blessed Mother.

In 1969 I formally became an earth guardian and social justice advocate when I handed out flyers for a program on acid rain given by Ralph Nader in South East Baltimore. Like so many other elders, I have led or been involved in numerous environmental, social justice, animals’ rights, and economic change campaigns since then.

In 1984 I founded what is now the oldest and longest free standing outpatient holistic healing center in America, The Ruscombe Mansion Community Health Center in Baltimore, Md. After harvesting what would be the last fruits from a plum tree in the garden, I had a waking engagement with an apparition that was standing by a century old pine tree. There she was in stunning light. Dressed in white with a blue trim, her head covered by a flowing white cloth headdress. It was the Blessed Mother who had saved me decades earlier but whom I had not seen since then. Her manifestation in the material realm just twenty feet away from me was incredible. When she spoke her voice was clear, beautiful, precise, compelling and as spirit behaves when she enters our lives, the Blessed Mother was swift coming and going. Looking directly in my heart she said, “I want you to start the New Order of the World Mother” and then she was gone. I had no time to ask her, “what do you mean, what should I do, why me?” Adding humorously to the story today, “besides, I’m Jewish!” For years I tried to imagine what a New Order of the World Mother would do, who its members might be, how it could carry out activities in the world. I reasoned she meant to care for the earth, an “ethos of care”, which the animals I write about in White Spirit Animals, Prophets of Change, communicated telepathically to me. A society centered around the welfare of the mother, child and natural world produces the healthiest and happiest communities. Anyone could join I thought to myself, and any activity that was life affirming and elevating could constitute the Order’s good works. I have tried to live my life personally fulfilling her request but I never estbalished the New Order of the World Mother as I was asked to do. It seemed an impossible task for a sensitive woman adversely affected by large crowds and who needs long stretches of solitude for good health.

When I received a print galley of Order of the Sacred Earth in preparation for interviewing Matthew Fox about Creation Spirituality on 21st Century Radio®, I had an immediate recognition and recollection of my own calling. My husband and I have both been grateful to have interviewed Dr. Fox may times over the past 30 years on our new paradigm radio program but this time was very special. I felt moved to thank Mathew for fulfilling the work the Blessed Mother instructed me to undertake so long ago. The Order of the Sacred Earth offers all of us the opportunity to unite our varied efforts wherever we live and experience the empowering connectedness we truly share.

The universe is reflexive, and like the prophets and prophetesses of prior centuries that I wrote two books about, cultivating courage, imagination and humility activates our soul-given talents. When we accept our roles as visionaries, co-creators, and Earth lovers, we become daring collaborators with each other and all of nature. 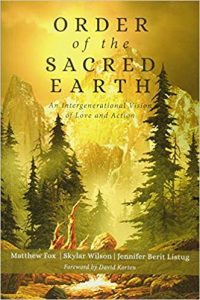 I know that divine grace is a power we can invite into our lives, and that we must do all that we can in honorable dedication to prepare the way, as farmers do soil for seed. We are all rooted in paradise, craftsman of noble souls and mortal bodies, whose enabling energy comes from divinity’s enduring love. This is what the Order of the Sacred Earth celebrates, to feel deeply interconnected in our planetary and personal destinies of service, galactic citizens in our local habitats, god like beings destined to evolve together.

The Order of the Sacred Earth can integrate our varied actions world wide, energizing our quantum connectedness for greater personal and planetary well-being. Accepting our roles as visionaries, co-creators, and Earth lovers, we become daring collaborators with each other and nature.