Oregon Woman Finds Cougar in Living Room, says Telepathy Helped to Get It Out 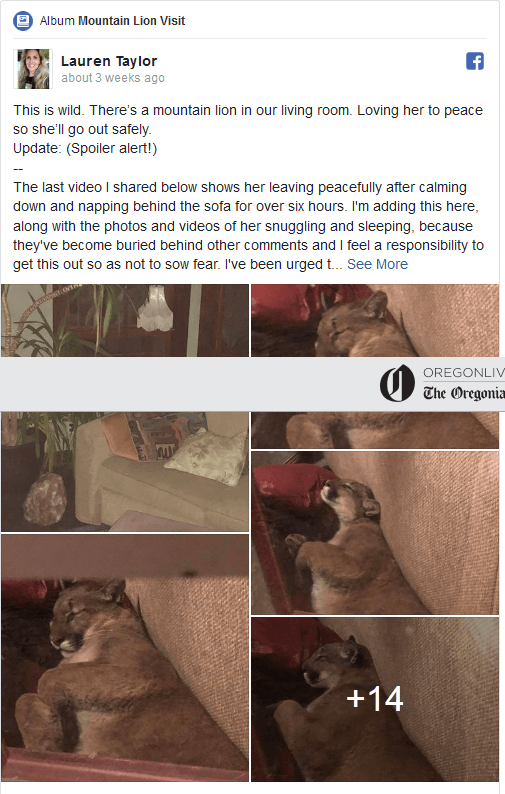 An Oregon woman who found a mountain lion in her living room says she relied on “frequency and attunement,” “feline-speak eye blinking,” and telepathy to calm the animal and safely guide it out after it took a six-hour nap behind the couch.

“This is wild,” Lauren Taylor of Ashland posted on Facebook at the beginning of July.

Taylor, who was not immediately available for comment, wrote about her encounter with the wild animal on the social media platform, saying the animal entered the household after drinking from a fountain/pond near the back door. Taylor said the cougar entered through the open door, and said it was likely unaware it was walking indoors at first because of plants and stairs built around tree branches.

A housemate shouted after seeing the animal, and Taylor said the cougar was agitated and tried to leave through a closed window before hiding behind the sofa. When Taylor went to check on the animal a bit later, she found it asleep.

“When I made noise, she woke up and looked startled so I consciously raised my frequency, gazed lovingly into her eyes, and communicated using feline-speak eye blinking to calm her,” Taylor wrote on Facebook. “It was amazing to realize that this worked. I gazed lovingly then blinked hard and then she did it back! Then, she went back to sleep.”

Taylor explained in her post that cats are “extremely psychic” and “perceptive of energy.”

Before dawn, Taylor said, she sent the animal telepathic pictures of routes out of the house and up into the hills, then woke the animal up with drumming. A video posted to her Facebook shows the mountain lion leaving its place behind the couch and appearing to exit the house as drumming echoes in the background.

“She roused and knew just what to do…. walking out through the open doors, through the yard, across the creek, and through the empty field behind us exactly as we had shown her,” Taylor wrote.

Taylor said she had extensive experience with energy and animals and does not suggest seeking out encounters with mountain lions.

“May she stay safely in the hills to enjoy a long life as a wild and healthy lion,” Taylor said.

Should you encounter a cougar, officials say, make yourself appear bigger by putting your arms up or out and make noise to shoo the animal away. Turning around and running may make you appear like prey.

« An Immigration Lawyer On What Really Happens To Women Seeking Asylum » Era of ‘Biological Annihilation’ Is Underway, Scientists Warn