Hurricane Sandy – A Lesson to Learn From 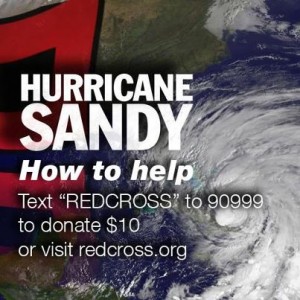 For almost thirty years now, Hieronimus & Co in its various radio broadcasts, television, print, online, and other public forums has addressed the increasing weather extremes as a result of global warming. This discussion began in earnest in 1985 among scientists and only now is it becoming self evident with the October surprise of Hurricane Sandy, not to mention the severe droughts, floods, record temperatures world wide, and other anomalous weather patterns and their deleterious impacts on animals, nature and humans.

As the East Coast encounters this ‘frankenstorm’, I hope more citizens appreciate the lack luster environmental policies promoted by ex-Governor Romney and less than robust initiatives of the Congress and our President, Barack Obama, whom I voted for and will again. It is also possible to see that dividing citizens is not a progressive nor productive outcome of the current Presidential election or USA media and is the result of the outright corporate theft of what once was a prerogative of citizens. Candidates are now bought and sold by their underwriters rather than being chosen by the people they are obligated to serve. We all must hold Congress accountable for their perpetual failure regarding our earth’s well being.

In fact, what we need now on Earth as in America is unity. The consequences of our one hundred years of polluting the seas, the skies, the soil and our food system for short sighted corporate profit, means that everyone will suffer together for generations to come

Now is the time to use our best intelligence, and our greatest loving hearts to pursue sustainable energy systems, agricultural, and environmental strategies as we vigorously pursue proper stewardship of the earth.

May Hurricane Sandy be a teacher that promotes why we must work together in realizing that “what we do to the earth, we do to ourselves”, which was the slogan I coined in 1990 for Earth Day in Maryland. Everyday is an Earth day and we are called to loving union to correct what we can plainly see has been driven by greed and an entrenched status quo, rather than by a life economy guided by reverence for all that exists, on this great planet Earth.