Supermarket Without Bees: What Would The Produce Section Look Like Without Pollinators

Have apples, carrots, lemons or watermelon on your grocery list? Bad news — without bees, these foods could be much harder to find in the produce section, according to a new campaign from Whole Foods Market.

Bees are still having a rough time. The British Beekeepers Association said more than a third of colonies died in England this past winter, and U.S. populations suffered similar drops. Researchers have said an industry practice of feeding bees corn syrup may spur colony collapse disorder, which could affect the $30 billion crop industry dependent on bee pollination.

Europe instituted a temporary ban on a class of pesticides believed to be harmful to bees in April, and researchers at Washington State University have proposed a bee sperm bank to try and breed hardier colonies, but the insects are still dying in record numbers.

So what would a supermarket without bees look like? Whole Foods pulled all of the produce dependent on pollinators from the shelves of their University Heights store in Rhode Island — a whopping 237 items, or 52 percent of the normal product mix.

Take a peek below. 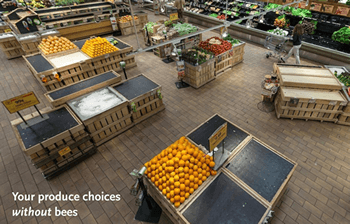 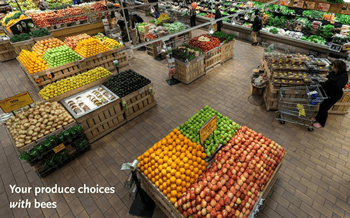 « Social Media Options At A Glance » Tell Congress: Stop the pesticide that is killing bees