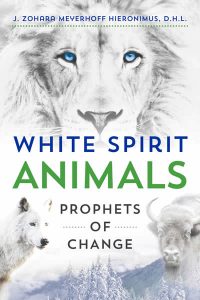 • Reveals how White Spirit Animals are calling humanity to restore balance, respect, reverence, and honor to protect our animal kin, ourselves, and the earth

Beautiful rarities of nature, all-white animals are held sacred by many indigenous cultures and offer deep wisdom to all who will listen. In addition to the White Buffalo, there are other revered white animals, such as the White Wolf, White Lion, White Elephant, and White Bear. Each of these White Spirit Animals belongs to a species at the apex of their ecosystem, meaning the environment in which they live will unravel without them. Speaking through ancient and modern prophecy and the many humans who communicate with them, these White Spirit Animals are urgently calling to humanity to restore balance and protect our animal kin, ourselves, and the earth.

Combining sacred elder lore, science, and her own telepathic dreams, Zohara Hieronimus looks at the special role played by White Spirit Animals in spiritual traditions and prophecy around the globe, where they are seen as guardians of animal wisdom, each with a special purpose and gift. She reveals how they have collaborated with humanity since the last ice age, inspiring spiritual practices and conferring shamanistic powers, and are considered the stewards of the great spiritual transformations that occur during transitional times. Sharing the waking vision of White Spirit Animals that called her to write this book, and their message of CPR for the earth–conservation, preservation, and restoration–she explains how to use shamanic dreaming and trans-species telepathy to communicate with these great spiritual teachers. Exploring each one of the major White Spirit Animals–White Buffalo, White Lion, White Elephant, White Wolf, and White Spirit Bear–and the cultures in which they are honored, the author shows, for example, how the White Buffalo is called a harbinger of peace and abundance by many Native American tribes and the White Bear, the great earth healer, teaches us about nurturance and patience.

As a bridge between the spiritual and physical worlds, between humans and animals, White Spirit Animals are calling us to open our hearts to the wild, to the sacredness of the wind, the water, the earth, and dream a new world into being to heal our own personal and collective wounds and restore the earth to balance.

Washington, D.C. —The Standing Rock Sioux Tribe won a significant victory today in its fight to protect the Tribe’s drinking water and ancestral lands from the Dakota Access pipeline.

A federal judge ruled that the federal permits authorizing the pipeline to cross the Missouri River just upstream of the Standing Rock reservation, which were hastily issued by the Trump administration just days after the inauguration, violated the law in certain critical respects.

In a 91-page decision, Judge James Boasberg wrote, “the Court agrees that [the Corps] did not adequately consider the impacts of an oil spill on fishing rights, hunting rights, or environmental justice, or the degree to which the pipeline’s effects are likely to be highly controversial.” The Court did not determine whether pipeline operations should be shut off and has requested additional briefing on the subject and a status conference next week.

by: Vicki Batts Is India on its way to becoming an entirely organic nation? Just over two years ago, in September 2014, the Indian Government launched their revolutionary  Rastriya Krishi Vikas Yojana (National Agriculture Development Program) as a way to encourage organic farming, and decrease dependence on chemical agents. In January 2015,  the state of Sikkim […]

If you think you’re doing something good by slathering sunscreen on yourself and your kids before hitting the pool, you might want to think again. A new study places sunscreen firmly on the list of products that can do more harm than good as Russian scientists discover the destructive effects of chlorine in swimming pools on sunscreen.

Money doesn’t grow on trees, but electricity might someday. Iowa State University scientists have built a device that mimics the branches and leaves of a cottonwood tree and generates electricity when its artificial leaves sway in the wind. Michael McCloskey, an associate professor of genetics, development and cell biology who led the design of the […]

The Physicians for Responsible Medicine (www.PSR.org) have complied scientific studies related to the impacts of fracking. The conclusion is that the technology as done today nation wide, has inherent deleterious health and environmental impacts.

There is no such thing as safe fracking!!! From health impacts, to contamination of drinking water, methane gas pollution, geological agitation, increased earthquakes, the compendium PSR has created should be used by every State and County fighting to place a complete moratorium on all fractured rock gas extraction.

Dr. Zohara Hieronimus’ article Existence is a Continuum appears in the Winter 2016 issue of Species Link Journal. She writes:

“Animals, like indigenous tribal people, view existence and non-existence as a continuum. Animals, like many in the human population, are more concerned about the entire Earth and its ecosystems than themselves specifically. For instance, Bear, Wolf, Lion, Elephant, Whale, and Bison are all apex animals in their ecosystems. If any of them become extinct, everything under these capstone species dis­assembles. Their message to us, as I write about in my upcoming book on the White Spirit Animals, is ‘to save as many of us as you can.'” Read the full article.

Regenerative Agriculture: our best shot at cooling the planet?

It’s getting hot out there. For a stretch of 16 months running through August 2016, new global temperature records were set every month.[1] Ice cover in the Arctic sea hit a new low this past summer, at 525,000 square miles less than normal.[2] And apparently we’re not doing much to stop it: according to Professor Kevin Anderson, one of Britain’s leading climate scientists, we’ve already blown our chances of keeping global warming below the “safe” threshold of 1.5 degrees.[3]

If we want to stay below the upper ceiling of 2 degrees, though, we still have a shot. But it’s going to take a monumental effort. Anderson and his colleagues estimate that in order to keep within this threshold, we need to start reducing emissions by a sobering 8-10% per year, from now until we reach “net zero” in 2050.[4] If that doesn’t sound difficult enough, here’s the clincher: efficiency improvements and clean energy technologies will only win us reductions of about 4% per year at most.

Positive Thinking in a Dark Age

I recall a Buddhist parable involving a stick that appears from a distance to be a snake, causing fear to rise in the perceiver. As the perception shifts upon closer examination, the fear subsides and the relieved hiker continues down the path. Understanding and awareness have a lot to do with how we feel and how we act. As hosts to the dominant cultural mindset (our collective understanding of who we are in the universe), our minds play a critical part in both perpetuating our dominant way of life and also in shifting away from it. And so it’s just possible that I have performed no greater service in my three decades of activism than to simply challenge myself and others to consider the possibility that the social systems that support us and we sustain are inherently incapable of meeting basic human needs and that we must make a fresh start, in a sense, if we are to survive this century and prosper thereafter.

These systems are the largely invisible, cyclical patterns of interaction among and within society’s individuals, institutions and principalities. They include small town school systems all the way out to our globalized economic system and to the mother of them all, our globalized monoculture. You need to perceive the stick as a stick before you can confidently move on, and this consideration is a critical step in transforming the way we live.

In 2015, a major study of 24 indicators of human activity and environmental decline titled ‘The Great Acceleration’ concluded that, “The last 60 years have without doubt seen the most profound transformation of the human relationship with the natural world in the history of humankind”.[1] We have all seen aspects of these trends, but to look at the study’s 24 graphs together is to apprehend, at a glance, the totality of the monstrous scale and speed of modern economic activity. According to lead author W. Steffen, “It is difficult to overestimate the scale and speed of change. In a single lifetime humanity has become a planetary-scale geological force.”[2]

Every indicator of intensity and scale of economic activity — from global trade and investment to water and fertilizer use, from pollution of every sort to destruction of environments and biodiversity — has shot up, precipitously, beginning around 1950. The graphs for every such trend point skyward still.

Bayer and Monsanto: A Marriage Made in Hell

by Martha Rosenberg and Ronnie Cummins

The two multinationals that teamed up during the Vietnam War to poison millions of people with their Agent Orange herbicide—St. Louis, Mo.-based Monsanto and Germany’s Bayer AG—are looking to become one.

Bayer has announced a bid to buy Monsanto in a deal that would expand Bayer’s GMO and pesticide holdings and add drugs to Monsanto’s global portfolio. Monsanto has rejected the latest bid, but the two are still in talks.

If Monsanto, perhaps the most hated GMO company in the world, joins hands with Bayer, one of the most hated Big Pharma corporations on Earth (whose evil deeds date back to World War I and the Nazi era), the newly formed seed-pesticide-drug behemoth would have combined annual sales of $67 billion.

That’s a staggering figure. But here’s another, even more alarming: Combined, the new mega-chemical/seed company would control 29 percent of the world’s seed market and 24 percent of the pesticide market.

Topography of Tears by Rose-Lynn Fisher

Photographer Rose-Lynn Fisher uses an optical microscope to capture the different patterns contained within human tears produced from grief, happiness, exposure to onions and more. Visit her website www.rose-lynnfisher.com/tears.html to see the images and read more.

By Elif Batuman for the New YorkerOn Monday, President Obama signed legislation honoring the American bison, also known as the buffalo, as this country’s first national mammal. In temperament, physique, and symbolism, it is difficult to imagine a creature more starkly different from the bald eagle, which has been our national animal since 1782. (The new law does not affect the eagle’s status.) A raptor known for its razorlike talons and visual acuity, the eagle has served as the imperial standard of the Roman legions, the Byzantine Empire, the Spanish Army, and many other forces. Not so the bison, North America’s largest land mammal, which weighs in at as much as a ton.